JE DESIGN had a full tuning programme ready for the SEAT Cupra Ateca at the point of its debut in late 2018. Its success has encouraged JE DESIGN to develop the second stage of its Cupra Ateca programme under the Widebody Evolution tag. The new components consist of 20-inch alloy wheels, a suspension lowering kit, a 360hp power kit, and a TUV approved sound flap exhaust system.

JE DESIGN has been tuning the Volkswagen Group's sporty models for many years. More recently they have found success tuning the Spanish-built SEAT models, whose high-performance range has been marketed under the Cupra label since late 2018. The debut model was the Cupra Ateca, followed by the Cupra Leon and Cupra Leon ST. Other sporting offshoots like the Cupra Formentor will follow soon.

While the existing Widebody kit developed by JE DESIGN fits all normal versions of the Ateca, the 'Evolution' version is only available for the Cupra Ateca. To this end, the stylists further increased the dimensions of the wheel arch extensions, which partner the more aggressive standard bumpers of the Cupra Ateca for a more muscular look. This ten-piece Evolution wheel arch extension kit is in stock now.

JE DESIGN founder and CEO, Jochen Eckelt does not believe in a Widebody conversion without suitably uprated wheels and suspension. As the 'Sportrace' wheel in gold matt finish paired with the Widebody Cupra Ateca are of a substantial 10.0J x 20 inches size, the flow-forming process used to optimise their strength-to-weight ratio is vital to minimise unsprung weight. The Twin Five wheel in black gloss is also available in the same size.

These wheels can be ordered as a complete wheel and tyre set with 275/30R20 Continental Sport Contact 6 rubber. Alternatively, the standard 19-inch wheels and tyres can be used with appropriate spacers to help them fill out the wider wheel arches.

JE DESIGN sport springs reduce the ride height of the Cupra Ateca by 30mm all round. These uprated springs work within the performance envelope of the factory DCC active dampers whose Comfort and Sport modes are selectable at the touch of a button.

JE DESIGN's stainless-steel sound flap sport exhaust with EU type approval ends in four oval tailpipes, with the choice of polished or black enamel finishes. The electronically-controlled sound flap system is linked to the OE driver selectable Comfort, Sport and Cupra driving profiles. In the Comfort and Sport the exhaust flap remains closed and the exhaust note is a subtly sporting burble. However, when the flap wide open in Cupra mode the full singing voice of this bespoke exhaust is unleashed.

For enthusiast drivers JE DESIGN offers a Plug and Play additional electronic control unit that increases output of the turbocharged 2.0 litre petrol engine from 300 hp (221 kW) to 360 hp (265 kW), along with an extra 50 Nm of torque over the standard 400 Nm.

Top speed remains at the standard 247 km/h, but the 0-100 km/h sprint drops from 5.2 sec to just 4.8 sec, while the improved in gear response makes overtaking swifter and safer. This performance conversion is covered by a two-year warranty from first registration right up to a maximum of 100,000 km.

On a practical note, JE DESIGN offers a self-adhesive panel to protect the paint on the top edge of the bumper from unsightly scratches during loading and unloading. This is available in either black gloss or matt silver.

These JE DESIGN components also fit the new Cupra Ateca Special Edition, and come with full EU and Swiss type approval. Painting and fitting can be undertaken by JE DESIGN, or one of their authorised dealers. 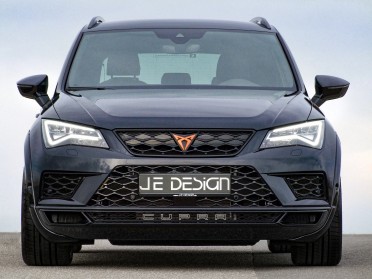