JE DESIGN equips the most powerful series Seat of all time from now on with an extra helping of sporty racing sound at the touch of a button. Because the refiner from Leingarten has developed flap exhaust systems for the three- and five-door hatchback as well as the station wagon named ST. Both exhaust systems fit perfectly into the original rear apron and also have a Swiss confirmation according to ASA guidelines in addition to the EC approval. Optional, we have the choice to build in a HJS-Downpipe with 76mm diameter and 200 cells in a high performance kat, which is especially developed to fit the JE DESIGN flap exhaust system. The downpipe helps the flap exhaust perfectly to dispose of the fumes and raises the performance at the  same time. Measurable changes can be felt in particular when the electronic JE DESIGN high performance kit is installed, and last but not least the sound gets sturdier and more voluminous. The downpipe also provides an official EC approval. That's music to the ears of all Seat fans!

The new flap exhaust systems can be conveniently operated through the touch screen and driving profiles Normal, Sport and Cupra stored in the "Seat Drive Profile". In the modes Normal and Sport, the exhaust flap is closed, the exhaust sounds sporty but discreet. If, however, the Cupra mode is selected with the three- or five-door hatchback as well as with the station wagon, the exhaust flap opens like the gate at a bullfight. At the same time, the innovative exhaust from JE DESIGN shows what kind of sound technology is hidden inside: thoroughbred racing sound just like motorsport fans from the race track know and love.


A visual highlight are the four impressive tailpipes, each with a diameter of 80 millimeters. Entirely made of stainless steel, these mark the flap exhaust system for the Cupra in the version for the three or five-door hatchback. The package, developed by JE DESIGN, includes the front silencer replacement pipe, the center muffler with exhaust flap, the rear muffler with left/right output as well as the two beveled and rolled twin tailpipes with clamp. With the help of the JE DESIGN CAN switching module, the flap is actuated. A pre-assembled cable and hose set completes the set provided with installation instructions. Those who want to maintain the original look of the three- or five-door model, but not forgo on robust motor sport sound, reach for the flap exhaust system with oval tailpipes (140 x 90 millimeters). This is offered by JE DESIGN for the same price.

JE DESIGN has an equally technically sophisticated product with the available flap exhaust system for the Seat Leon Cupra ST in the starting blocks. Like the three- and five-door models, this is also controlled by the original driving profile selection made by Seat. There is a sound upgrade made of four striking tailpipes with a diameter of 80 millimeters each plus EC approval and installation instructions. The flap exhaust system for the Cupra ST is made of stainless steel and consists among other things of a JE DESIGN stainless steel front silencer and the Y-connecting pipe from front silencer to the rear muffler. Both rear mufflers are equipped with an exhaust flap. They each open into a round, beveled and rolled up twin tailpipe with a diameter of 80 millimeters. A CAN-switching module for the flap control system and a completely preassembled cable and hose set round off the range of components for the ST Cupra. 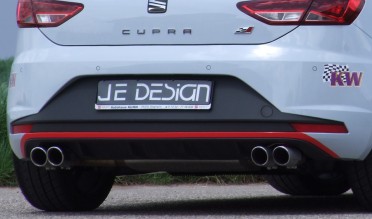 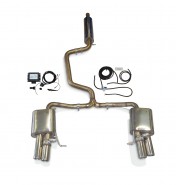